The theme of this student project has been the testing of usability of EST (“Efficient Symbolic Tools”) software, developed in the Laboratory of Microcomputer Systems, for the analysis of sequences of reactions in biological systems. So far, EST has been employed for the verification of systems and algorithms from the fields of computer science, electrical engineering, and telecommunications, whereas in this project, it was used to deal with the regulation of gene expression in the bacterium E. coli. The formal verification method for reactive systems known as model checking was used, which requires that the system is formally specified. EST supports the specification by using a language similar to CCS (“Calculus of Communicating Systems”) and the branching-time logic ACTLW (“Action-based Computation Tree Logic with Unless operator”). The main results of this project are presented in an article published in Elektrotehniški vestnik (in Slovene).
Mobile phone FERIphone: 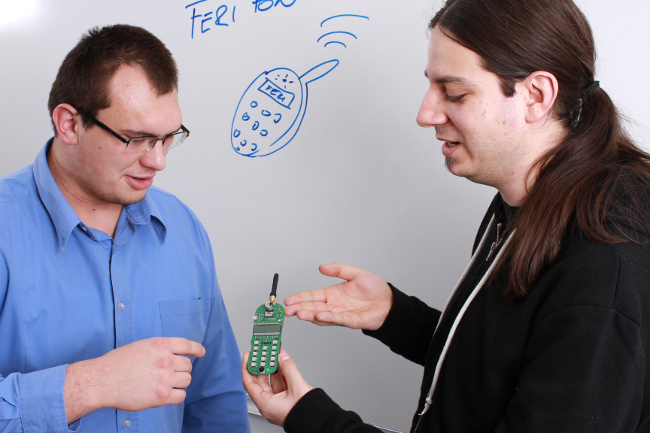 Within the scope of the project two students of electronics made a mobile phone using single printed circuit board that does not require a housing shell. The emphasis was particularly on basic services that every mobile phone should support such as voice calls, sending and receiving text messages, contacts etc. The mobile phone supports all Slovenian networks and allows the use of existing SIM cards. User interface is a simple keyboard with 12 symbols, two additional keys and an LCD screen. The mobile phone was presented at the Fun Research event as part of the Researchers’ Night 2013 event.

Students of electronics developed electronic kits for the Colibri engine control. Using a control console via wireless communication, integrated gyroscopes and individual steering of Colibri power engines allow hover manoeuvres and precise steering of Colibri to be performed. The project was presented in form of an article in the American Financial Times in 2008.

Within the scope of the project students developed a mobile communication platform, which receives audio and video signals with a help of a microphone and a video camera. A set of sensors measures the temperature, acceleration and distance to obstacles and forwards data to a server through wireless connection. The server displays incoming data on the screen via a graphical interface and provides online access to data through an adequate client. The server further enables data transfer to a mobile platform and speech-driven platform control by using the automatic voice recognition system placed on the server. Students presented the Genesis system at the competition organised by the American company Lantronix.
ROBOSAPIEN project:

Students of electronics developed a control system for robots. More specifically, they developed comprehensive software that can run on a PDA and represents the Robosapien’s head. Using the right sequence of movements, the Robosapien can dance to the music played on the PDA. The Robosapien project was presented at the Hevreka event in Cankarjev dom in Ljubljana in 2008, where it received great attention.

Students of telecommunications are currently setting up an IP TV network infrastructure. The IP Multimedia Subsystem (IMS) was taken as a basis and will be upgraded with IP TV functionality. The system will enable transmission of audio-visual contents through fixed and mobile clients. It will serve as a basis for developing a set of services linked to IP TV management, content play and services connected to the next generation internet.

BLUEMSG project:
The project includes the use of Bluetooth technology in developing advanced services on mobile devices, which can be efficiently used in different intelligent environments. The services are developed in Java using the LightWeight User Interface Toolkit LWUIT, which is very suitable for the development of mobile phone applications. Current services of BlueMSG system allow a number of things such as controlling the BQ portal via a mobile phone, opening doors of the Becquerel laboratory, controlling the BQ intelligent environment, communication with other users via mobile devices, acquiring information on internships and placements, possible thesis topics or office hours of professors and assistants and much more.
Intelligent Home System:

Within the framework of this project the concept of communication components needed for the completion of the functionality of an intelligent home was set up and software for surveillance and control were implemented.
Automation of the intelligent home system provides an independent operation with emphasis on remote surveillance through SMS messages, with which the system informs users on possible alarms during their physical absence. 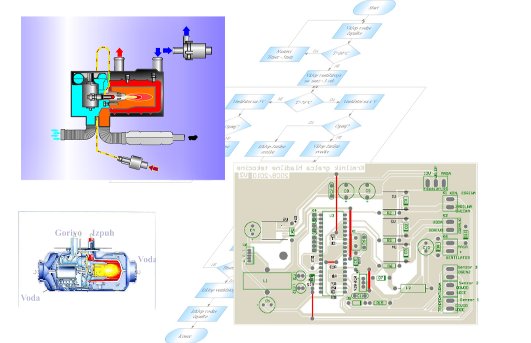 The aim of coolant heaters is to heat the coolants in motor vehicles, particularly cars. Their purpose is twofold: to heat the air in the cab and the engine before ignition. This way, cold engine start-ups can be avoided. With the engine already being heated up to the working temperature from the start, its usage is minimized and fuel economy improved compared to when the engine starts cold. The heaters have controllers, which need to be connected to the car computer. Usually, these controllers can only be used in cars of particular brands.

Within the framework of the project a controller was made, which operates independently of the computer and is suitable for installation in any car. Heater features were measured and a scheme for the controller, a printed circuit board and software produced. The controller manages the fuel pump, the fan, the water pump and the heater glow plug.

AVMA was a student project, in which 5th year students of the academic degree study programme Electrical engineering – Electronics could participate. The project examined the model of active suspension. More specifically, the model is based on magnetics, where there are two hard magnets with opposing poles, which provide suspension similar to that of coil spring cushion buffer. With an additional coil on the buffer the magnetic field can be weakened or strengthened. This way the suspension characteristics of each buffer can be controlled.

As part of the subject Interfaces and Converters, a student has chosen the FM transmitter project, because he was very interested in how something can be made cheaply rather than bought in store. He was particularly interested in what type of electronics needs to be included in the project and how sound can be transmitted wirelessly to radio receiver through radio waves.

IPcallME is a multimedia device, which enables video calls through IP protocol. By using the keyboard and the mouse it can also be used as a multimedia access point.

What electronic expert would not accept a challenge and build an own ECG device? Traditionally, professional devices are very expensive and thus complicated. As part of the subject Interfaces and Converters we decided to build a mobile version of the system for measuring one’s heart rate, that can be used in sports and in everyday medical practice. Relevant information on similar, yet simpler systems was retrieved from the World Wide Web. A mobile version of an ECG device already exists in form of a cassette that can be inserted into the Game-Boy console. However, we were not discouraged by this finding and came up with an idea to create an ECG monitor system based on wireless Bluetooth technology. An interface for wireless transmission of information can be found in our mobile phones, PCs and other devices. To measure electrical potential on skin we used special medical electrodes with extremely high contact conductivity. They can monitor very little changes in a series of a few mV. The analogue signal obtained was additionally reinforced using a differential amplifier and transformed into digital form. This was followed by wireless transmission of information through Bluetooth interface onto the laptop. Using a specially written programme the obtained ECG signal was displayed on the screen.

To read more on individual stages of the project please click on the links on the right.

This project was carried out within the framework of two diploma theses by students of the Institute of Electronics at the Faculty of Electrical Engineering and Computer Science. The product has attracted much interest of the public when presented at the Technology fair Heureka ’06.

We are currently still watching our TV in 2D mode. However, this is likely to change soon as contents are increasingly becoming available in 3D. This mode is not only more user friendly, but the effects of presented content are also much better. Although we can already watch 3D movies in cinemas using so called polarized glasses, the question remains as to when we will be able to watch 3D movies in the comfort of our home with or without polarized glasses.

There are several reasons as to why there are no 3D televisions in our homes yet:

This motivated us to create our own 3D player and a 3D image recorder with the help of LCD 3D XYZ screen of the Cero Creativity company. 3D illusion, which appears when watching a 3D screen, is created because our left eye sees a slightly different picture than our right eye. Our XYZ 3D screen enables a transmission of different pictures to our left eye and our right eye. This is done using a special high-quality lenticular lens. Our 3D players currently use 8-view systems, which, according to the producer, give the best result. Using special software that we developed for this purpose, we managed to compile 8 views into one picture that fits with the geometry of the lens down to the sub-pixel. An optimal 3D effect on the screen is created when sub-pixels are laid out appropriately.